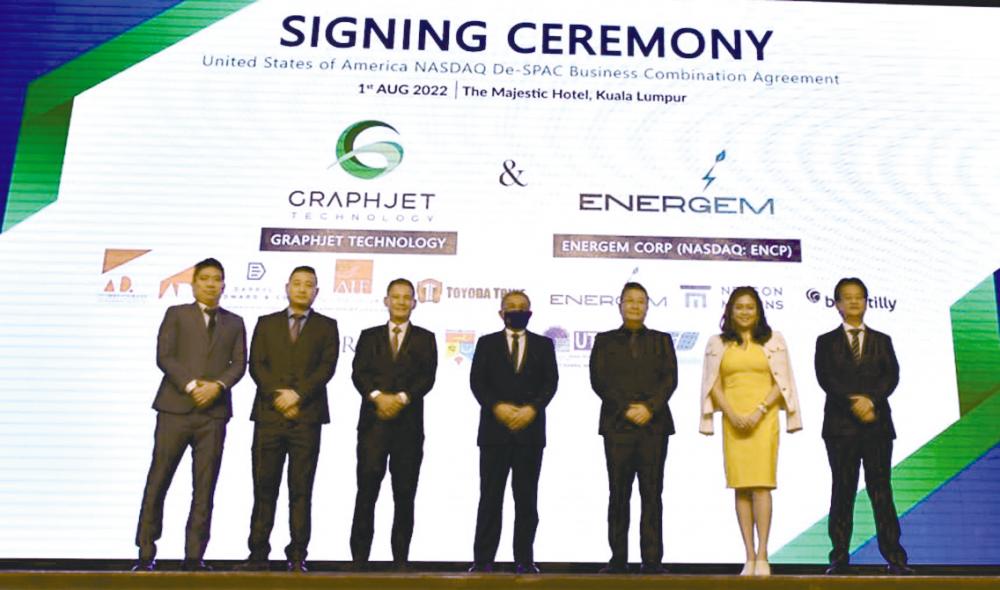 By Sergio Camarero2 August, 2022No Comments

~ Graphjet’s state-of-the-art technology manufactures graphene and graphite, which are used in numerous advanced applications, including advanced batteries for vehicles and power storage ~

Kuala Lumpur, Malaysia, Aug. 01, 2022 (GLOBE NEWSWIRE) — Energem Corp (“Energem”) (Nasdaq: ENCP, ENCPW), a special purpose acquisition company, today announced the signing of a definitive share purchase agreement with Graphjet Technology Sdn. Bhd., a Malaysian private limited company (“Graphjet” or the “Company”) that will result in Graphjet becoming a wholly-owned subsidiary of Energem, and Energem to be renamed Graphjet Technology and is expected to be listed on the Nasdaq Global Market under the ticker symbol “GTI.”

Graphjet is the owner of state-of-the-art technology for the manufacture of graphene and graphite, a critical raw material used in a variety of industries, such as biomedical, automobile composition and coating, electronics and home appliances, food and beverage processing, energy storage, batteries in electric vehicles, mechanical strength enhancement, sensors, semiconductors and digital products. Upon the closing of the transaction, Graphjet will continue to be led by its CEO, Mr. Lee Ping Wei, an experienced senior corporate executive through multi-billion listing in Malaysia.

Graphjet uses their breakthrough patent-pending technology to transform a renewable waste product, palm kernel shells to the highly valued artificial graphene and artificial graphite. According to a study by Insight Partners released in April 2022, the global graphene market size was USD $821.2 million in 2021, projected to increase to USD $7,555.8 million by 2028 and register a CAGR of 37.3% from 2021 to 2028.

Upon completion of its initial manufacturing facility, Graphjet expects to produce 10,000 tons of graphite and 60 tons of graphene using its processing technology from 30,000 tons of dried palm kernel waste annually. Lee Ping Wei, CEO of Graphjet commented, “Graphjet Technology’s announcement today represents the next major milestone on our journey to becoming a breakthrough graphene and graphite producer. Our technology will bring a renewable product to advance future technology.”

Mr. Swee Guan Hoo, CEO of Energem Corp. added, “From the many companies under consideration by Energem Corp., our goal was to find a breakthrough technology that met our criteria of investing in long-term sustainability for our world. Graphjet not only produces high-demand materials in a growing market, but does so by utilizing a commonly available waste product in Malaysia. Our team looks forward to our continued work with Graphjet and we are committed to their growth strategy.”

Under the terms of the proposed transaction, Energem Corp will purchase 100% of the issued and outstanding shares of Graphjet such that Graphjet will become a wholly-owned subsidiary of Energem Corp. In the process, Graphjet will become a publicly traded entity under the name “Graphjet Technologies.” The transaction reflects an implied pro forma enterprise value at closing of approximately $1.49 billion.

Assuming no redemptions by Energem’s existing public shareholders, aggregate consideration to Graphjet equity holders will be approximately $1.49 billion, consisting of up to $117 million of cash consideration funded by Energem’s cash in trust from its initial public offering and $1.38 billion of rollover equity.

After the closing, Graphjet plans to retain up to $112 million of cash on its balance sheet, which would provide financial flexibility and facilitate organic and inorganic growth opportunities.

At the closing of the business combination, approximately 8.5% of the outstanding shares of the combined company is expected to be held by public investors, with existing Graphjet shareholders owning approximately 89%.

Graphjet Technology Sdn. Bhd. was founded in 2019 in Malaysia as an innovative graphene and graphite producer. Graphjet Technology has the world’s first patent-pending technology to recycle palm kernel shells generated in the production of palm seed oil to produce single layer graphene and artificial graphite. Graphjet’s sustainable production methods utilizing palm kernel shells, a waste agricultural product that is common in Malaysia, will set a new shift in Graphite and Graphene supply chain of the world.

Energem Corp. is a blank check company formed for the purposes of effecting a merger, capital share exchange, asset acquisition, share purchase, reorganization, or similar business combination with one or more energy and/or sustainable natural resource companies. In November 2021, Energem consummated a $115 million initial public offering of 11.5 million units (reflecting the underwriters’ full exercise of their over-allotment option), each unit consists of one Class A ordinary share and one redeemable warrant, each warrant entitles the holder to purchase one Class A ordinary share at a price of $11.50 per share. ARC Group Limited acted as sole financial advisor and EF Hutton, division of Benchmark Investments LLC, served as the sole book-running manager of Energem’s initial public offering.

Participants in the Solicitation

Energem Corp. and certain of its directors, executive officers and other members of management and employees may, under SEC rules, be deemed to be participants in the solicitation of proxies from Energem’s shareholders in connection with the proposed transaction. A list of the names of those directors and executive officers and a description of their interests in Energem will be included in the proxy statement/prospectus for the proposed business combination when available at www.sec.gov. Information about Energem’s directors and executive officers and their ownership of Energem ordinary shares is set forth in Energem’s final prospectus dated November 15, 2021 and filed with the SEC on November 17, 2021, as modified or supplemented by any Form 3 or Form 4 filed with the SEC since the date of such filing. Other information regarding the interests of the participants in the proxy solicitation will be included in the proxy statement/prospectus pertaining to the proposed business combination when it becomes available. These documents can be obtained free of charge from the source indicated above.

Additional information regarding the participants in the proxy solicitation and a description of their direct and indirect interests is included in the proxy statement/prospectus filed with the SEC on Form F-4. Shareholders, potential investors and other interested persons should read the proxy statement/prospectus carefully when it becomes available before making any voting or investment decisions. You may obtain free copies of these documents from the sources indicated above.

You should carefully consider the risks and uncertainties described in the “Risk Factors” section of Energem Corp. final prospectus dated November 15, 2021 and filed with the SEC on November 17, 2021 for its initial public offering and, the proxy statement/prospectus relating to the transaction, which is expected to be filed by Energem Corp with the SEC, other documents filed by Energem Corp from time to time with SEC, and any risk factors made available to you in connection with Energem Corp., Graphjet, and the transaction. These forward-looking statements involve a number of risks and uncertainties (some of which are beyond the control of Graphjet and Energem Corp.) and other assumptions, that may cause the actual results or performance to be materially different from those expressed or implied by these forward-looking statements. Energem and Graphjet caution that the foregoing list of factors is not exclusive.

No Offer or Solicitation

This press release relates to a proposed business combination between Energem Corp. and Graphjet Technology Sdn. Bhd., and does not constitute a proxy statement or solicitation of a proxy and does not constitute an offer to sell or a solicitation of an offer to buy the securities of Energem Corp. or Graphjet, nor shall there be any sale of any such securities in any state or jurisdiction in which such offer, solicitation, or sale would be unlawful prior to registration or qualification under the securities laws of such state or jurisdiction.